Louis Homer met me at the gate to the church where his funeral service was in progress against the backdrop of the island’s oldest natural monument - Naparima Hill. 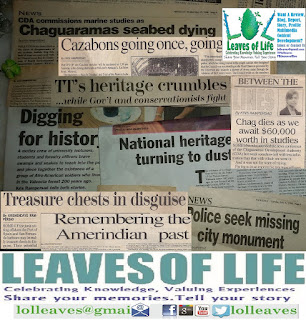 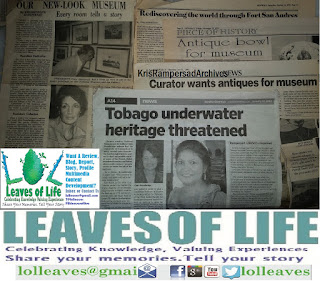 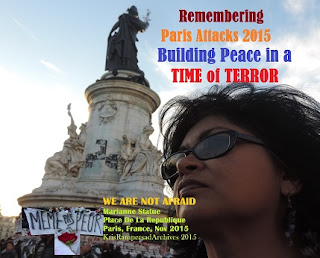 “Whey you doing out here, Louis?” I was about to ask, “shouldn’t you be in there?”
He wore his normal cheeky twinkle, as if to say, ‘You were always somewhere else when I did my field visits, but I knew you would come today. I have to go back inside now. Over to you.’

An immediate rebutt was already on my lips: ‘Whey yuh chain?’ He would understand that I meant the paraphernalia folkloric lagahoos are reputed to drag in the afterlife, since he had now migrated to the other side. Picong was always part of our discourse.
Inside the Our Lady of Perpetual Help Roman Catholic Church on Harris Promenade, San Fernando, a bouquet of red roses draped a coffin in which Louis’ body was being prepared for send off. Eulogists were recalling his life, his incessant energy, his annoying persistence, his long list of interests and skills, his relentless spirit, his passion for history and heritage. 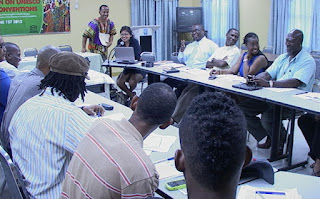 The usher to his funeral service at the church door invited me to sign the condolence book which had one dotted line for memories of Louis. Louis and I were colleagues in two areas: journalism and heritage, and then some. Journalists may not be the most liked of persons; chroniclers of history are perhaps more appreciated especially by the direct communities they touch. Our society finds a way to isolate each sentiment and express its love or dis-love accordingly. The not-too-packed church reflected this ambivalence.
I looked around for the man who met me at the gate but he was nowhere in sight. It couldn’t have been Louis. Louis would never allow me, nor anyone else, the last word. On the Tourism Heritage Committee, everyone else had to compete with Louis for air time. His last words to me were: “is now you and Eintou (Springer).” It took me a while to realise he was referring to our contributions on the committee – we were two of the most vocal and he annoyingly unceremoniously cut into anything one was trying to say. That was at the meeting that preceded the most recent one which was the day when his heart failed.
It brought back another heart failure two years earlier, and the sound of the dull thud as the body fell from the chair to the floor, her words echoing with the thud, ‘I am tired. I have no more words.’ 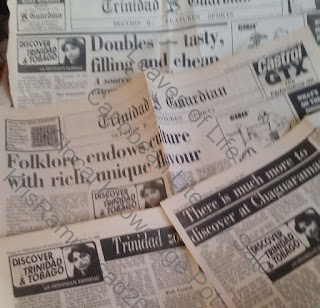 Pat Bishop’s heart gave up at the emotive meeting of the Expert Committee on Culture and Heritage met at the Twin Towers. Two days earlier she had echoed similar sentiments when she, along with Peter Minshall, Jackie Hinkson, Hans Hanomansingh and a couple others met in lagahoo session with me at the Trinidad and Tobago National Commission for UNESCO. Our blue print for propelling culture and heritage into viable creative industries, drawn from demonstrated successes and knowledge and understanding of the sector, were being stymied by myopic interpretations. They wanted to brainstorm a strategy for the meeting carded two days away that would transform the thinking of those charged as change agents but still steeped in old outlooks and older bad habits.
A Highway to Nowhere
I had grown up in South Trinidad, I told Peter Harris, in our last conversation. I fully lived the daily frustrations of waiting for hours for a taxi, or any vehicle for the matter out of my village because vehicles refused to come through the unkempt, potholed roads.
As a cub reporter just cutting my journalistic tooth in South Trinidad, my duties were the vague 'covering the South' - which the deskbound north editors saw as a dot on the map so I still have the first freelancer's monthly pay check of TT$120 (no, there is no missing zeros there!) which my mom and sister, to their horror, had to supplement for several mre months, despite the fact that I was out of school and now a 'working woman' as it didn't even cover even travel expenses, much less any other expenses.
Covering the South meant traversing the entire southern peninsula, for the most parts inaccessible. Drivers just would not risk the damages to their vehicles to enter a district in flood prone Penal/Barrackpore, the precarious pitch-growing paths of La Brea districts or dirt tracks of other districts in San Francique, Siparia. No one can deny what new transit networks could do to lift access and opportunities to the South.
But does it have to be done by razing of the assets that present the most potential for any success at diversification we may have if we were to break through into the new golden economies – culture, heritage, tourism, agriculture – the renewable industries that would endure long after the oil dried up? What a golden opportunity we have to demonstrated how the some 200 years of industrial 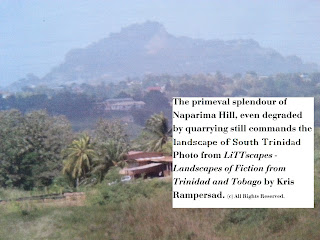 And then there’s Peter, the other Peter. A few months before his heart gave up, earlier this year, archaeologist Peter Harris called seeking support in a desperate bid to save his life’s work – the Banwari site – presumably the oldest known human skeletal remains in this hemisphere which he had discovered forty-odd years ago, though not many were any wiser.
We exchanged knowledge. I told him of sites I had visited – the area where Indonesia’s Java man was discovered was an expansive protected landscape, with museum and research institute; here all we were seeing was a grave site, not the bigger picture - of a time that was still challenging scientists trying to reconstruct and reconnect the missing links. He was preparing a report and wanted to consult with me on the accepted international standards for protection. That was Peter – quiet, soft spoken diplomacy to the end despite his extreme agitation of possibly having to watch his life's work erased. The proposed highway to Point Fortin would pass dangerously close to the site, and the construction activity threatened to overwhelm whatever additional evidence may still be present, not to mention the quarter acre the myopic planners saw as ‘the site’.

Current custodians are happy to just focus on the few square feet of the skeletal site itself with no consideration given to its larger contexts and the surrounding districts. Industry – oil, gas, asphalt - shy away like the quick-fix politicians - from any substantive actions on how the rich harvests of the district

could also help support exploration of new initiatives that could only add value to the area, and give the span of communities there a different view of themselves, of their place in the scheme of things, while directly opening them up to a whole host of new economic self generated individual-driven cultural and heritage employment opportunities and activities that function complementary to the technical skills of the district’s traditional industries that if at all, only indirectly filter down to them. Planning for the area, or lack thereof, has given no thought to these significant dimensions that could springboard the long neglected districts into 21st century relevance.
Louis, Peter and Pat - three heritage soldiers whose life stories and interests might be different, but whose focus were very similar to each other. They summoned their creative energies to negate the similar frustrations: dinosaur institutions, individuals touting change, but unwilling to take the necessary actions to effect them, then falling into their comfort zone only to replicate bad habits.
Louis, Peter and Pat – three lagahoos - sleepless, tireless explorers and proponents of heritage as essential to endowing the next generation with a sense of place and identity, but also sustainable sources of livelihood from the self initiative, innovation and creativity that spring so naturally from our communities.
Peter was a discoverer, of heritage. He tried to lodge his findings with institutions which reduced their significance to the narrow confines of the myopic limitations these institutions impose on themselves - post independence notwithstanding.
Louis was a hoarder of heritage. His anxiety that they would be lost to the ignorant, or the marauding development bulldozers, meant he was often only-too-willingness to cut, sometime dangerous, corners, as I had pointed out to him in relation to the Ganteaume tombstones in Mayaro which we subsequently found out were in his museum and several other issues that arose on the committee.
Pat Bishop was a creator of heritage.
‘T&T is a place that if you wanted to listen to a concert, you have to create one,’ she would say, and she created concert after concert. Louis wanted a place where our history and heritage could be preserved so he created a museum. I got the message: if I wanted people to read my books, to read local authors, I should create my own literacy and literary movement – and that means, in the absence of accessible systems to do so, inspire literary appreciation, educate, research, write, publish, market, distribute, promote, cajole, lobby, etc; that, and expect potential heart failure.
That is our social culture. It is a cultural norm that we do not acknowledge. In not acknowledging it we cannot address it. The story of inertia in the heritage, culture and tourism sectors – still largely viewed as cruise ships and flag waving – while our frustrated youths, seeing the unfulfilled potential around them, take up arms. It is not much different for any of our other sectors and the systems in the functions and attitudes that govern them.
That is also in our political culture: if you want changes in governance, create a political party. If that party falls short, you create another one. It is the same dynamics that have generated the mushrooming of more than 7000 civil society organisations across the country – a CSO/NGO each for less than three quarters of a square kilometre if one wants to get statistical, each championing a cause seen more relevant to the several others it may be duplicating.
Inflexibility and the absence of commitment to transform, change, and evolve; the lack of proper mechanisms, infrastructure and facilities for national assets that will ensure adequate protection of our national assets, including heritage assets encourage citizens to take actions in our own hands.
That void is adequate breeding ground for vigilantes.
When state systems fall down civic-minded citizens are left to take up the slack, until even the state begins to support corner-cutting, because it fulfils its agenda for politically expedient quick fixes, while the preparation of the substantive mechanisms and infrastructures are put on hold. By whatever name one wants to call it, it is vigilante action, fostered because the existing institutions charged with those responsibilities show little interest, understanding or willingness to take the necessary actions to transform themselves to become more relevant to evolving and dynamic social changes and expectations. The vigilantes become heroes. That’s what happens on this side of the fence, of those like Louis, Pat and Peter, who worked to protect, secure, build a future in villages and communities for other generations.
It is not rocket science, if we connect the dots. It is no different and just as much the cultural norm of what happens on the other side of the fence: those other community leaders, gang leaders, those propagating another kind of laga-hoodlumism, the other kind of vigilante justice...
The race is on and the bets may be already fixed on who’s going to win the war; and who will die trying!
If only we knew ourselves…
R.I.P. Louis. Peter. Pat. Happy Independence! From those of us independent, but still dragging lagahoo shackles on this side!
Posted by Demokrissy at 10:48 PM 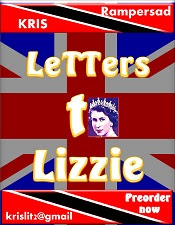 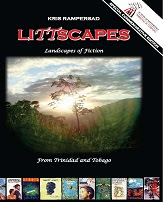 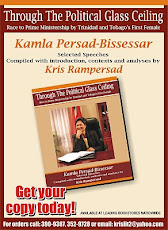